Somewhere in a wood-paneled '70s holdover ranch house in Burbank, retired porn-stars-turned-marketing-executives slicked back their mullets, checked their acrylic nails, and buckled down to work on the advertising text for the Senso Cock Pleaser:


This super stretchy cock pleaser is better than the real thing! Just spread her legs and ravage her tight, soft pussy!

The Senso Cock Pleaser is, it seems, sister to the Butt Banger, both of them stretchy, miniature, decapitated love dolls.

I must agree, however, with the claim that this product offers a "tight pussy" -- in fact, I'd say that, as this product is a penis-sized facsimile woman, that, in fact, her entire torso is "tight."

Note from the photo that the tiny woman is not only headless, but also:
Hott! I must admit that "having a neck thick enough to stretch around the penis of a man over 100 times one's own size" is not a feature most live women offer.

For the first time here on SarcasticSex.com, I am reviewing a gay male-themed toy, gifted with the stereotype-defying name "Butt Banger."

When I first beheld this object I had a hard time parsing its anatomy, which is never a good sign with a sex toy. For a handheld device, the orifice seems precariously tiny, which, if your $26.75 is supposed to get you multiple uses of the Butt Banger, likely indicates that the entire thing is very stretchy. Could be good, though; perhaps other portable anuses simply aren't elastic enough.

As in the case of the Titty Blow Masturbator, in which the breasts have been scaled down in order to be conveniently affixed to the lower chin, the Butt Banger features a scaled-up set of "teasing balls and penis for incredible stimulation," bent backwards from the tiny headless body so as to rub you the right way. 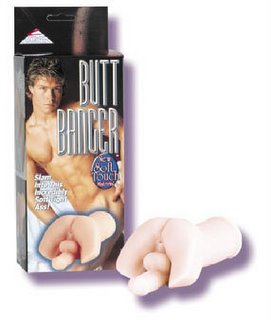 
This delightfully stretchy penis extension is made of CyberSkin, so you don't have to worry about sacrificing the look and feel of a real penis in order to make the most of the man you have! 3" may not sound like a lot, but it's definitely enough to make a big difference in how satisfying penetration feels. Best of all, the comfortable, skin-like material won't irritate him, so he'll be happy to wear this sensual sleeve for as long as you want! Don't be disappointed in your man's member any longer -- slip on the CyberSkin and have some fun!

I'll take it from the top:

That being said, the 8" Realistic Cock W/E-Z Rider Ball is clearly a replica of a common child's toy (sold here at Amazon as the "Ball Bounce & Sport Fun Hopper") that has, as Joshua Grosvent so eloquently put it, "gone sprung a dick."

I suppose you could just store the whole thing upright in a closet, ready for action. Maybe toss a sweater over it.
Posted by Jenspresso at 1:36 PM 71 comments:

I read a joke today that prompted me to go review an S&M product for you:

One day a man came home from work to find his wife crying hysterically in the kitchen.

"Well," replied the man... "I guess a spanking is out of the question?"

Mmn-hmmn. And if you're looking for some good, wholesome S&M, why not try the inflatable bondage chair?

You will be bound to please your partner with this versatile Inflatable Bondage chair. Made of soft and comfortable materials, this chair is like sitting on cloud. The wrist and ankle restraints are padded to be comfortable for those naughty little encounters. The Velcro straps are adjustable to fit most sizes. Always use caution with restraint devices.

Because nothing says sexy like "KMart dorm furniture that requires a bicycle pump."

In what way is this chair "versatile"? You can strap someone into it in a normal sitting position. If you tried to put the person into some other position (rump up?) the chair would probably tip over. It needs a counterweight. This chair seems patently incompatible with heavy S&M, acupuncture, knife play, particularly pointy high heels, and that fun thing where one of you dresses up like a Transformer.

Also, regarding the picture on the box -- if you strap a woman into a chair before removing her one-piece leotard, you are too stupid to fuck.